skip to main | skip to sidebar

Saturday 28 February we organised an evening with performances by some of the participating artists and invited local rappers and musicians from the Bijlmer and dj Nathalie Bruys closed the project with some nice music!

Posted by SandraDee at 19:50 No comments:

Mostly It Happens At Night closing

At 28 February we wrapped up the ten days working period. We had amazing guest appearances by different experts in the real and virtual space. The artists created wonderful projects and performances. And the audience responded enthousiastically.
Some images of the working period: 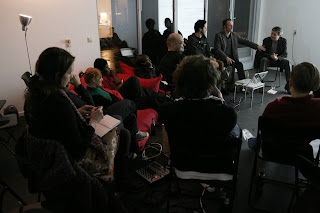 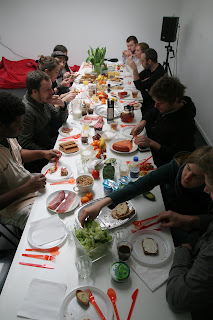 Sunday brunch with live skype meeting with Jonas and Daniela from Rio and short presentations by each participating artist about their inspirations and concept development of their project in the Bijlmer. Photo: Regina Kelaita
Posted by SandraDee at 19:34 No comments:

Yesterday the utopian island of Marcel van den Berg was moved to the 'G-buurt' in a small pond, surrounded by the old flatbuildings of the Bijlmer. Partly renovated and partly old school flatbuildings.
During these rainy days the Le Corbusier's Fantasy Island is a nice colourful intervention in the area of gray flatbuildings and muddy roads... 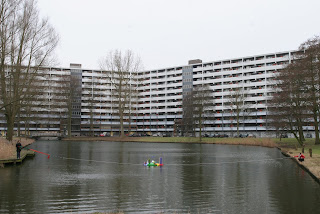 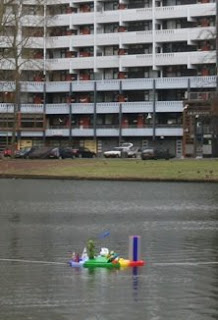 Posted by SandraDee at 17:53 No comments:

Last Tuesday (24 February) Harm was our guest and we invited him to talk about cyberspace..
He showed multiple examples of the work of mainly young artists on the internet. Artists who mainly develop works which explores the formal notions of internet as a medium. Harm collects these artworks on internet at the ‘online-gallery’ Club Internet and presented them in online groupshows as a curator. So, Harm is actually an online curator.
He collected the works and used to email the owner/artist for permission, this approach led to an online community of internet artists from all over the world. At the same time he tried to create a sort of imitation of an opening. By imitating this ritual moment in the artworld, these artists all over the world created a sort of parallel world in which they performed this festive moment.. 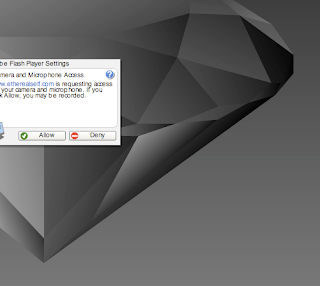 We discussed quite briefly the difficulties on authorship and ownership: how to sell or collect these (temporary) works of internetart?

We were totally surprised by the wonderful artworks, containing beautiful web based concepts. Don’t forget to check his own website presenting internetart: www.harmvandendorpel.com
Posted by SandraDee at 12:39 No comments:

Mostly Nothing Happens At All

Visit Mostly Nothing Happens At All, the live performance of Maurice Bogaert!
Posted by Maaike G at 13:25 No comments:

Sunday brunch with contributions by the artists

We gathered in the studio space for a nice meal and via Skype Jonas Ohlsson and Daniela Bershan joined us at the table.
At the moment they are celebrating Carnaval in Rio de Janeiro and told a bit about the bailafunk parties in the ‘favelas’ and the drumbands on the street, which I actually spotted one on the street in the Bijlmer, the day before...of course Carnaval is celebrated in the Netherlands as well.
Luckily the Brazilian / Latin American traditions have found their way to the Bijlmer, instead of the Catholic Carnaval traditions from the South of the Netherlands…

Bailafunk is a very popular sort of music mainly produced in Rio de Janeiro. Jonas and Daniela combined the influence of living in the Bijlmer with the characteristics of this music and presented their record.

All the artists prepared a short presentation of their inspiration or working method.
Marcel showed parts of a Dutch documentary on the downfall and revival of the Bijlmer architecture. He talked about his interest in Utopian architecture, which is also the fragile funding of the Bijlmer.

Maurice showed us on the internet all the webcams in the Bijlmer, which were mainly cameras in computer server spaces. He used one of these online webcams to create a scale model of the space that was watched and create a narrative/story on the developments within the confinements of this space.
On the website you can see two live videos placed next to each other on the page. These videos show recordings of the original webcam and the recordings of his scale model.

The source material for the ‘alternative’ google map of the Bijlmer was presented by Regina. She showed amazing photographs of the weirdness of the surroundings and told a bit about her fascination with these kinds of images. She will create a ‘zoom in and out’ map of the Bijlmer based on her photographs.

Pilvi presented her working method for this project. The last few weeks she visited several religious services in the Bijlmer and asked these people to pray for her. She collected websites and phone services for prayers on request, most of the Dutch phone numbers are based in the Bijlmer…
She made several audio recordings, which she will present at Flatstation in the Bijlmer and she’s preparing her performance this Thursday (26 February). Come to the Florijn 42!

Marktplaats.nl (Dutch Ebay) provided the main characters for the project by Constant Dullaart. He researched the services offered in the surroundings of Florijn 42 and he will invite some people who provide very different services to the Florijn to create a ‘bonte avond’: join us at Florijn 42 this Friday!
This group of people create the basis for the work he’s developing on the internet, see posting: Ghetto Princess...

Stay in touch and keep a close eye on our website: www.mihan.flatstation.nl
Posted by SandraDee at 00:39 No comments:

i have collected several pictures from advertisements for services offered in the area of the exhibition. Most advertisements were for hair dressers that spiced up their ads with pictures showing the proof of their abilities to do extensions, weaving waving, what ever its called. Anyway, I really liked the way they take the pictures, rather not showing the face, rather sexist, taking away the personality. I added some music I found through the people that bought http://www.bijlmer.com, called "ghetto princess".
all pictures collected here

Posted by constant dullaart at 00:46 No comments: